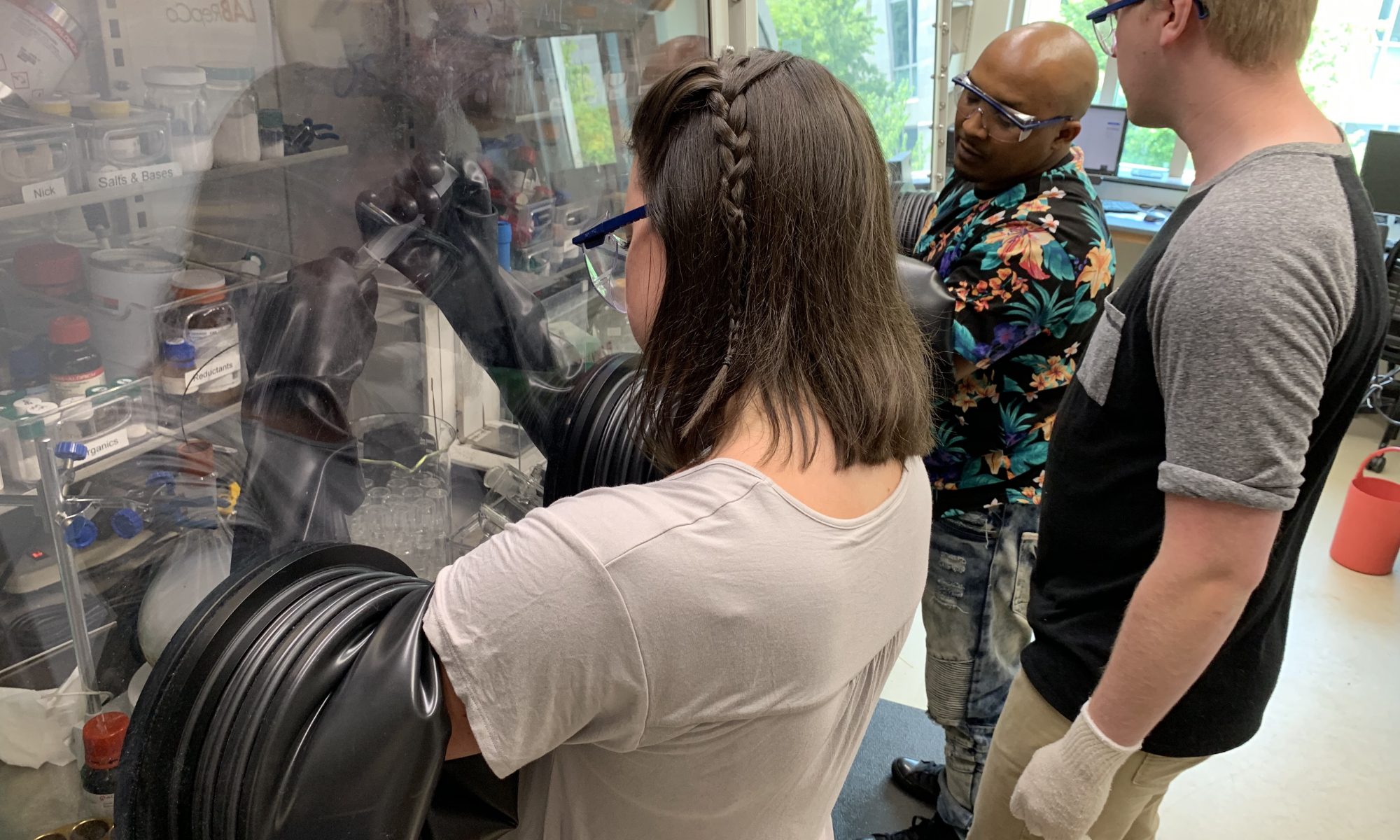 Here’s just a little of what is going on this summer:

First, we said congratulations to Jennie and Nick as they graduated from Davidson, Class of 2019! Jennie is heading to DC for a 2-year position at the NIH. Nick is heading to graduate school after a gap year doing research. I’m so proud!

That was Sunday. The following Monday, Ellen and Corey started their summer working in the lab. They both were awarded with Davidson Research Initiative fellowships to fund their research this summer. Ellen is continuing our work on redox flow battery electrolytes while Corey is helping to finish our first story on redox mediators for Lithium-Air batteries.

Two weeks later, we had a second wave. Nick came back for a few weeks to help train the next generation. Alexa is getting her first experience of synthetic chemistry, and Tashroom is trying to see where chemistry could take him as he prepares to head to college next year.

Corey showed up this past week like he was some kind of Food Santa. He brought some Caribbean food with him, and it was amazing. And then he told us about something called roasted coconut water, and my life will never be the same again.

Alexa is running her first chemical reaction of her career! Time for some new redox mediators!

We just finished week 4 of the summer. As the research advisor, nothing is more satisfying than seeing your group develop its own culture and personality. The lab now has a group Spotify station (I’ve even been given access to add songs!), there’s a BBQ next weekend, and we’re planning videos to teach future members how to do all the techniques we’re learned so far this summer.

Corey and Alexa met up with Dr. Dave Blauch on Friday to see if mass spec. could tell us whether we made our aluminum and boron complexes… good news coming!

Being a synthetic chemistry group, we use all manner of techniques to make and purify our compounds. Below you’ll see vapor diffusion recrystallizations, a cannula transfer under an inert atmosphere, and a silica gel column.

Nobody had better say we don’t know how to have fun!

I would say this summer has been one for the record books… in a bad way. On a weekly basis, there seems to have been some issue with supplies or instruments or nitrogen or … well, I don’t want to imagine what else could go wrong! Here are some pictures of me fixing the NMR’s autosampler.

Another bummer was the lack of regular nitrogen deliveries. I was so happy to see the gauge on our latest nitrogen tank say it was overfull!

As I was walking back from lunch, I noticed a group of children visiting our building. I asked if they wanted to check out a science lab, and of course, they said yes. I was so happy to show them what we were doing and to encourage them to be scientists just like us!

Early on in the summer, I asked the group if they were interested in making videos for future students to help learn lab techniques. They were more than excited, and we started brainstorming all the possibilities. Not sure that we’ll get to all of them, but we’ve already filmed 5 or 6, and Alexa has been working on the video editing to bring them all together. Check the Lab Instructional Videos page for them!

Tashroom loves his camera gear, and he brought in one of his nice ones for a few science photo shoots. Check out these pictures!